I am basically self taught on all aspects of the computer. Trust me, that’s not saying much as I really just know the basics, but still. I remember close to a year after getting my computer, it was running extremely slow. My brother asked me how long it had been since I deleted cookies. “Say what?” I asked with a puzzled look on my face. Needless to say the answer was NEVER. But after watching him, I caught on quickly and make sure my cookies are deleted regularly now.
So when my computer started hissing at me last week, I didn’t know what it meant. But I knew it wasn’t good. I hoped it would just go away if I ignored it. Instead, it grew louder and the thing began shaking and vibrating. It scared me.
After googling “computer hissing”, I realized the problem was problaby dust in my fans inside the computer. “No problem,” I thought. I pulled out my Hoover vacuum and sucked out the dirt I could see through the air vents on the outside of the computer. There was a lot of it, but I managed to get it all. I thought my problem was solved. I was wrong.
The hissing continued. And the motor sounded like an airplane gearing up for a long flight. I realized getting the dust off the outside wasn’t enough. I was going to have to go in. I had no idea what to do.
I armed myself with my husband’s smallest screwdrivers, a flashlight, the Hoover vacuum, and paper towels. I was surprised how easily I was able to get the cover off the computer, the screws came right out and I placed them safely in a container so I wouldn’t lose any.
When I lifted that cover off the base, I gasped in shock. It looked like Dust-Bunny-Palooza had taken place at the bottom of my hard drive. Literally, there were handfuls, upon handfuls, of dust and hair particles. Five years worth of buildup. I couldn’t believe my eyes! NO WONDER MY COMPUTER WAS HISSING! It was struggling for air! Struggling for it’s mere existence, and it knew that it’s owner , me, was NEVER going to help it if it didn’t resort to extreme measures! It was literally begging for help.
It took me close to twenty minutes to gather all the dust from the bottom, the sides, off the wires, away from the fans, and vacuumed out of the smallest crevices. But I did it! And I did it without the help of anyone. I was proud of myself.
But then I found that putting the computer back together proved to be a little more complicated. I couldn’t get the sides pushed in enough to the base, and when I did, I couldn’t get the screws all the way in. And I had leftover screws. I couldn’t understand how I had screws leftover! I taken such precautions to keep them safe, and now I didn’t know what to do with them.
After playing around awhile, I still had one screw leftover but felt I had it on snug enough to work. I replugged in all the wires to the correct holes (most were color coordinated for my convenience) and pushed the tower back into position. And then (I kid you not) the side of the computer fell off and landed on the floor!!! Guess that one little screw mattered after all. SIGH.
In the end, I got it all fixed and guess what? No more hissing! No more shaking or vibrating either! Just a smooth running computer that is now completely DUST FREE and I can say I did it myself. Yeah me!

I am always excited to share the free stuff I find. (I'm sure I drive my family crazy with my new hobby.) Everything I post is really easy to get, you don't have to take any stupid surveys or anything, just give them your basic contact information and they send you stuff. You've got to LOVE it! I know I do.

Get a FREE Flexible Tuscany Cutting Board

Get a FREE sample of Teddy Grahams Trail Mix 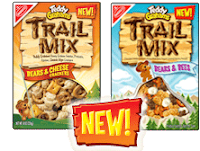 Get your pup some FREE Pup-Peroni Snacks

ATTACK OF THE G-STRING!

I wish that I had the litigious personality that some people seem to have. They will sue over ANYTHING, no matter what personal embarrasment it may cause them, just as long as there is a chance they'll rake in some moula.

I mean, if I was injured by the g-string I was putting on, I would NEVER think "LAWSUIT!" I'd just quietly put away the garment, tend to my injury, and slink quietly away feeling stupid for having been injured while putting on a thong! But not everyone is like me. Macrida Patterson is definately not like me.

Macrida is a 52 year old woman (YES, 52!!!!) and she is alleging that while attempting to put on a Victoria's Secret thong, a decorative metallic piece flew off the garment and struck her in the eye, causing injuries. She alleges that she was hurt last May by a "design problem" that caused the decorative piece to come loose and strike her in the eye, causing damage to her cornea. She missed a few days of work, and the injury will be "affecting her the rest of her life."

What is a 52 year old woman doing trying to wear a g-string anyway? I say, "LESSON LEARNED GRANNY! Step away from the thongs, and decorative panties, and you wont be hurt!"

(and if anyone can teach me how to post a link, I would greatly appreciate it!) :-)

Someone needs to slap this woman.

What in the hell is wrong with Naomi Campbell? Does she have some personal vendetta with airlines and their staff or what? She's at it again, this time she's accused of three counts of assaulting a constable, one count of disorderly conduct one count of using threatening, abusive words or behavior to cabin crew.

This is hilarious to me. She has been banned for life from British Airways. BANNED FOR LIFE! Here she is, this famous model with money out the rear and she doesn't even know how to behave and gets herself banned from an entire airline franchise.

This woman has had a history of violent behavior, and never really gets any punishment for it. Sure, she served a few days of community service last year, but obviously that didn't do any good. Remember when she showed up for "work" wearing high heels? Yeah, she took it real seriously.

We need to stop wearing kid gloves with these celebrities, and treat them the way anyone else would be treated in the same situation.